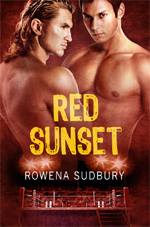 Finding love in the wrestling arena is unlikely, and a relationship based on the illusion of control isn't easy. Scott O’Doul and Brad Fraser have managed both: one night under a blue moon's light they found they meant more to each other than either expected. Their comfortable world is shattered when Brad is released, and he must head to Japan if he wants to keep wrestling. The work is exciting but lonely—six weeks seems an eternity. Once Brad and Scott reunite, they vacation at a lakeside cabin and find the miles apart have brought them closer—but they’ll need courage if illusion of control is to become the heart of love.

Available at Dreamspinner Press and Amazon.
Posted by Rowena Sudbury at 3:27 PM No comments: