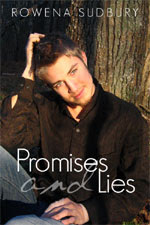 One year ago today Promises and Lies was released. I remember being so excited, and thinking it was going to be such a well received book.

Then time went by, and it wasn't really. It got a few really great reviews, but readers at Good Reads seemed to pick it apart for the smallest reasons. My fragile writer's ego was bruised. And then I got over it. Recently it picked up another bad rating, this one with a review that said "the author needs to learn how to write." Honestly, this criticism didn't bother me as much as it once would have. But, it did cause me to re-read the book myself.

What I decided is that Promises and Lies is a pretty good book. :-)

I guess my struggle is always going to be my fascination with language, and words. I'm not content to say someone "tries to get out of a situation" when I can say "extricate" instead. One of the things I prize the most when I read new books is if they teach me a new word. (I still remember with fondness learning the word "voluptuary" as I read a King Arthur novel once, I became fascinated with the word, although I've never used it myself.)

I'm not having anything published in 2011, aside from the Halloween Howl story "Depth Perception" and the freebie in the DSP newsletter "The Way They Are". 2012 is already shaping up to be a banner year though with two projects on the horizon. "Blue Moon" (which I suspect will come out early January) and The King's Heart in May or June. I'm looking forward to both of those things.
Posted by Rowena Sudbury at 4:41 PM No comments: